THE REAL RACE TO DAKAR

For a while, we have wanted to talk about Cross-Country Rally in Grand Prix Mag. A sport which is doing better and better, even though it has been out of the major media for some time now. The Reason ? Its evolution, coherent with today’s world, in many ways. The Africa Eco Race is a good example, as much on track than in the spirit of race.

Of course, everybody remembers the great African Dakar, the passion it triggered amongst teams, sponsors, drivers and manufacturers around the world. Even those who didn’t race would try, by all means, to join the caravan and head out, in the middle of winter, towards Dakar. In Paris, the feelings were no less intense with the « critic » side who were attentive to every bad step of the event, pointing out the accidents, the ethical issues as well as the large differences between the North and South of a continent still under construction. Of course, its most of the time only the comments of people who didn’t know our « Africans », these people for who fighting on 500km special sectors was a dream. The bike riders, the women, the young fearless adventurers, the elite drivers who tackled the desert and this race with the humility requested by the sand, the wind and the heat. 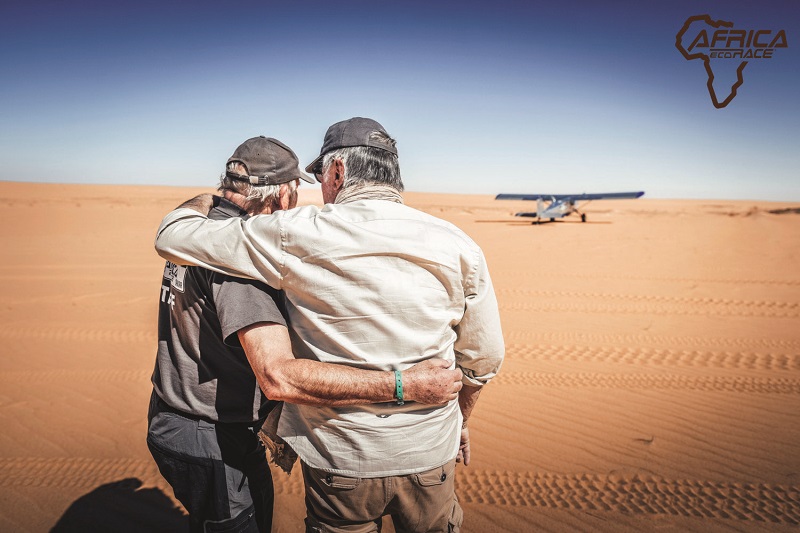 René Metge and Jean-Louis Schlesser. How many years and millions of miles on track and sand could we count for them both? A unique friendship and an unconditional love for Africa that they share with others every year in January.

Since the 70s, those who had dreamt about it, raced on the routes of the Dakar, in Morocco, Egypt, Oman, China or even the Spanish or Mexican Baja. Or even, nowadays, on the Silk Road. Everybody knows, that since then, with no doubt, the love for Africa cannot be cured. Some made some money and a little glory, when others invested all their savings and illusions, but none turned their back to Africa which remains, still today, engraved in the heart of these “Africans”
The Dakar ? For security reasons, turned its back to Africa, over ten years ago, to discover Latin America. Some loved it, but nobody ever said that this adventure was better than the previous. The others, who regretted this choice, stayed faithful to Africa. Such as Jacky Ickx, who lives there part of the year and created a shelter, Kenjiro Shinozuka who created and financed a school, and Jean-Louis Schlesser, who, never needing to boast about it, tutored and financed tuition of young Africans…
And then, we saw the Dakar change and become what was asked of them, remaining a cash machine. They created WRC inspired special stages, to answer the demands of the manufacturers, sometimes adapted their competitors’ penalties etc… And even went as far as taking money from Bolivia, which is barely poorer than Mauritania, to race the last edition before closing shop in Latin America and ruin the local economy and hopes of the local population…
The next step? First Saudi Arabia, that we mentioned in the last two editions of Grand Prix Mag. A kingdom which wasn’t yet involved – well we thought – in the Yemenite crisis. Then, in January, the Africa Eco Race, that the giant ASO did not even take into consideration before stepping on the same dates, Saudi invoice paid, with promising tracks, but a risky and unsettling atmosphere…
The Africa Eco Race made the bet, from the beginning, of a fair, passionate and authentic race, which will last thanks to the passion of its organizers and competitors. There they were, Hubert Auriol, René Metge, José Maria Servia and Jean-Louis Schlesser. Eleven years later, these “Africans” remain true to their race, which constantly increases and represents perfectly our Era. The yearly increase of the entries is a solid proof: we want to share, discover, show these marvelous countries, these mind-blowing dunes and the immense joy of arriving at the “Lac Rose”. We want to laugh in the evening, while sitting around the fire. Offer what we can, not take more than necessary and help out as much as possible, along the way, together, with a feeling we will keep, as Shino and the “others”, all our lives, deep in our hearts. By its simplicity and humility, the tale of Jean-Louis Schlesser moved us. Here it is, as is. The strong character from the nineties has become a wise man. Well… at least for this time. 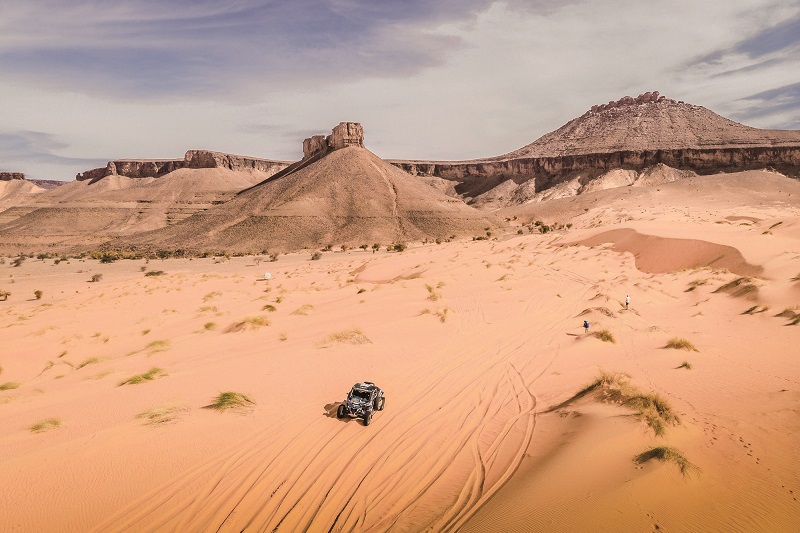 The one who tells you he knows Africa, even after having spent years there, is a liar. Over there, in the dunes, on the track, all changes and nothing is as planned. Part of the magic is there: keep your eyes open and you will be amazed. 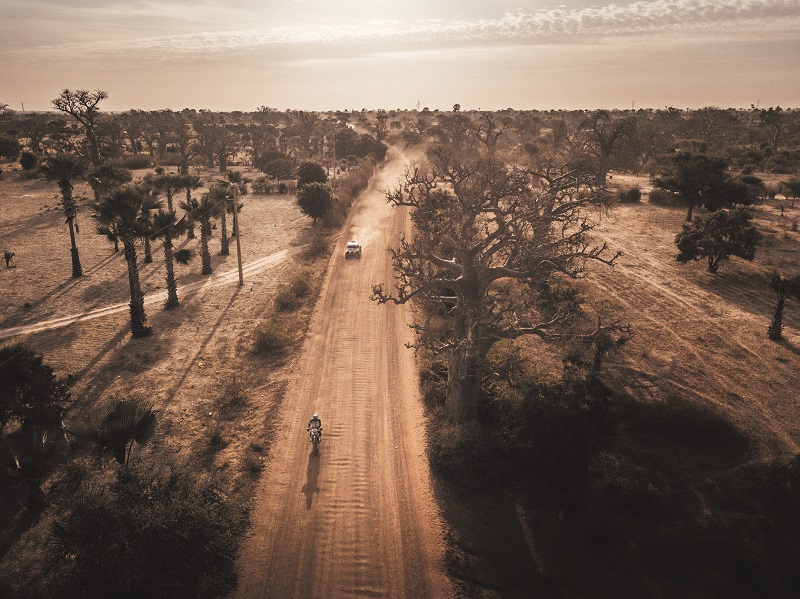 Jean-Louis, when you created the Africa Eco Race, did you imagine it becoming the great African race it is today?
The Africa Eco Race has existed for nearly twelve years already. The idea was to organize a race preserving the true untouchable values of cross-country rallying, as we like them. A marathon rally, tough but respected, a link from Europe to Africa in a human and ethical sports challenge. It will also be the fifth consecutive departure from the Principality of Monaco, which shares our values. And if this Monaco-Dakar is now a reputable race, I also hope its thanks to that.

What is the difference between this race and the world known Dakar?
Well, as I said, it’s a race with real human values, with conviviality, solidarity and a solid unity. It’s the discovery of the authentic, fragile, eternal and overwhelming Africa, with its impressive scenery and unforgettable bivouac in the middle of nowhere. And I think our competitors play a major role in all this magic. Each and every one brings his own ingredient to make what Africa Eco Race is today. Amongst the most important aspects, the respect of the Land and its People, who are our family. They welcome us and we must, with no shortcut, play the game and bring them all the support we can.

Why « Eco » ?
We never really boast about the operations we undertake on the rally. To give you a few examples; we have, especially at the departures and arrivals, several solar panels generated equipment. The objective is to develop, as early as this year, this concept onto the bivouac’s energy in order to replace the noisy and fuel hungry generator. We have also integrated an eco-participation: a system enabling each participant, partners, providers and collaborators to participate in a concrete project.
This allows us to maintain the Energy of Hope operation, launched with the AMADE Mondiale two years ago and which purpose is to provide solar lamps made in Burkina Faso to children living in remote locations without access to electricity. The project combines humanitarian, educational and ecological aspects. And most of us do much more than this privately. Over 30% of our competitors undertake charity projects during Africa Eco Race.

The dream on a rally like yours, isn’t it the creation of the route? How long do the “recce” last and how many people are sent on site ?
In terms of length, it really depends. It’s generally between four and five weeks with a team of four people and two cars. Several factors are to take into account: the weather can sometimes be very complicated, as it was recently in Morocco, and its still very hot in Mauritania, which can slow down the pace… Also, we do the maximum to “discover” novelties and, this year, there will be some, especially in the second part of Morocco, as well as a few in Mauritania. All this depends of the weather, but the result is to have an exciting new route on the next edition.

And who does this ?
The “Ancient Africans” dream team (laughs), René Metge and José-Maria Servia are at the head of it all! Nobody is more experienced and has more love than them for this part of the planet.

On the entry side, all is going as planned ?
We have a very stable number of cars and trucks for the last three years. The categories that are changing for the best are the SSV and the bikes: at the moment, we have doubled the entries compared to 2019. 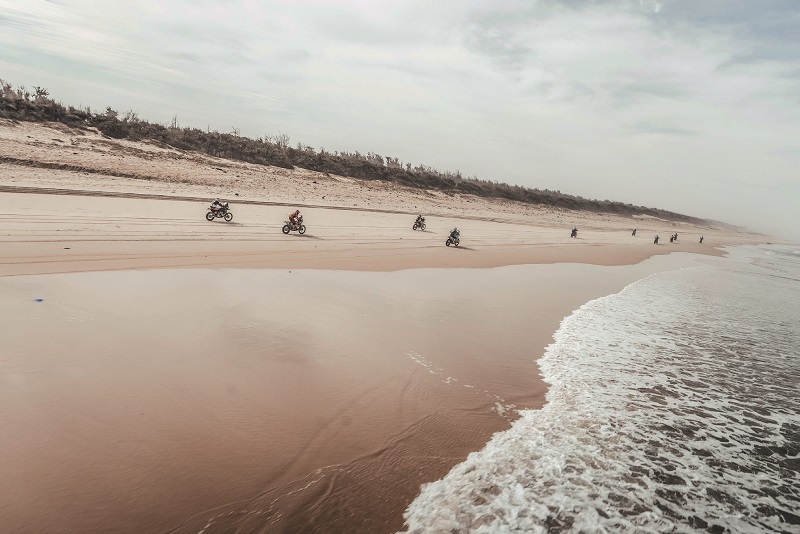 After phases of joy but also despair, if you anticipated each turn, each racing decision, this moment, with tears in your eyes, will be yours. And only then, it will be memorable.

Don’t you think that the increase in the number of participants is linked to the conditions of the next Dakar, a bit “risky” when it comes to security and “respectability” ?
No, I do not think so. Those who enroll in our race are attracted by the Africa Eco Race adventure, its authenticity and lack of compromise. Well at least I like to hope so…

Between Saudi Arabia and Yemen, between human rights and humanitarian crisis, is there a real risk that the Dakar is cancelled as back in 2008 ?
I guess the organizers have taken all the necessary precautions to avoid this. Well at least, I hope, for the competitors, that the race is on, becaus, having myself been a driver and team owner, I know how hard it is to race on such rally: set the budget, the logistics etc…

Recently, an explosion killed over a hundred people in Yemen, where fourteen million humans are deprived of food and healthcare and are at risk of dying due to the blockade and embargos, result of political measures put in place by the coalition driven by Saudi Arabia. Millions of lives are truly at stake. Can one accept fifteen million dollars from Saudi Arabia to organize the Dakar and ignore the distress of its neighbors, and not share with those who are in need ?
Indeed, the geopolitical situation is not the most stable. The context is a real risk. But even if I had to find an idea or solution, I wouldn’t know where to start. Anyways, I don’t think the rumored cancelation of the Dakar would be the best solution. ♦ 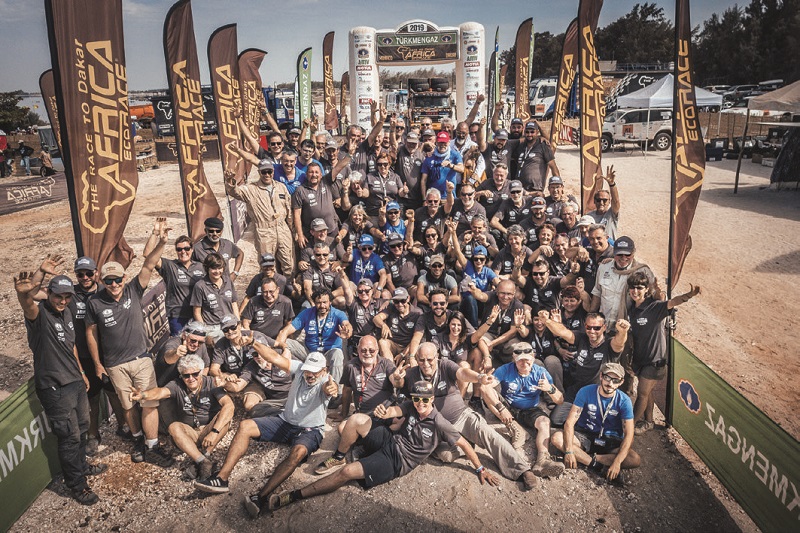 Heroes that we don’t present anymore and who don’t care. Nobody races for fame, but to learn from others, from Africa and to discover yourself in challenging moments. They dare it. 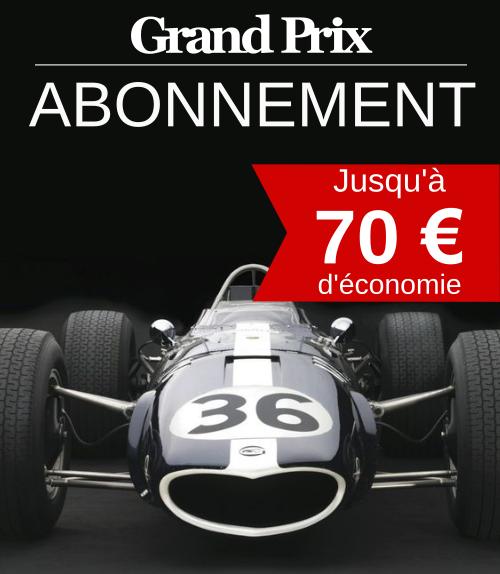